What is a Circular Economy?

What is a Circular Economy？

A circular economy is an economic system that circulates resources without producing waste which have been discarded in the conventional linear economy system of “Take”, “Make” and “Waste.”

The circular economy has gained worldwide attention as a new economic model for decoupling economic growth from environmental impacts and achieving a sustainable society. It has been at the heart of economic policies in the EU, including the adoption of the “Circular Economy Package” in December 2015.

Achieving the  circular economy requires collaboration among a wide range of industries, including manufacturers, retailers, collection and recycling companies. Cooperation from consumers is also essential in collection and recycling. Promoting the circular economy are expected to stimulate various types of cross-industrial and cross-sectoral collaborations, which will bring back connections to people and lead a thriving community.

The concept of the circular economy

The government of Dutch clearly distinguishes the circular economy not only from “Linear Economy”, but also from “Reuse Economy” which focuses on recycling.

The circular economy is different from the conventional 3R concept of “Reduce,” “Reuse,” and “Recycle.” It aims for zero disposal based on collecting and reusing resources from the very first stages of raw material procurement and product design. For example, the circular economy includes using as less virgin materials as possible, introducing a modular design that assumes disassembly for easy reuse and recycling after collection, and extending the product life as long as possible through repairs or parts replacement. This circular product design is called “circular design.” 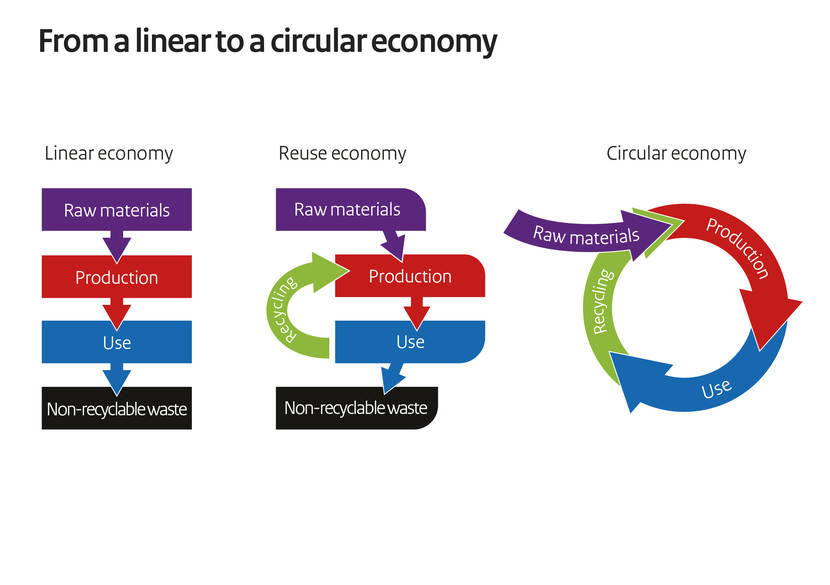 ※Cited from From a linear to a circular economy

Why we need the circular economy?

Why do we need the circular economy? That’s because it has become clear that the current linear economy is not sustainable at all from both environmental and social perspectives.
The United Nations estimatesthat the world population will reach 9.8 billion by 2050. According to an OECD study, the average income per capita will approach the current level of the OECD countries of $40,000, and global resource usage will double (167 giga tonnes) by 2060.

As the population and the per capita wealth grow, so does the amount of resources needed to sustain people’s lives. On the other hand, we have only one earth that gives us those resources. If many people in the world, especially in developed countries, continue to live on more than one ecological footprint, sustainable development is no longer possible.

Efficiency-driven, mass-producing and mass-consuming global economy have been creating large amounts of waste and bringing many negative externalities such as climate change, ocean plastic pollution, deforestation and the loss of biodiversity.

The circular economy can be a mechanism to change these situations and ensure that all people prosper while achieving social justice within the planetary boundary.

3 principles of the circular economy

5 business models of the circular economy

※Referenced from IDEAS FOR GOOD