Ikasa is an umbrella-sharing service that was launched in 2018 in Tokyo. Using Ikasa app, you can borrow an umbrella by simply scanning the QR code at umbrella spots set up in stations, office buildings, and other locations. You can also return an umbrella at any time by selecting one of the many umbrella spots in the city. This system, which makes umbrellas available anytime and anywhere, solves the problems of consumers who do not have an umbrella at hand when they need one, do not want to carry them around, and do not want to buy an umbrella every time it appears.

It is said that about 120 to 130 million umbrellas are consumed annually, and 60 to 70% of 80 million plastic umbrellas are discarded within a year in Japan. Ikasa’s umbrella sharing service not only prevents disposable umbrellas, but also contributes to the reduction of CO2 emissions by extending the life of umbrellas through the use of highly durable glass fiber.

Currently, in addition to Yokohama City, umbrella spots are being set up in the Tokyo metropolitan area, as well as in Kansai, Nagoya, and Fukuoka areas. The service is expanding to a nationwide scale with local and limited design umbrellas in collaboration with other companies.

What Makes the Project Circular

1.Umbrella Sharing to Reduce the Amount of Umbrella Waste

According to an estimate by Japan Umbrella Promotion Association, there are about 120 to 130 million umbrellas consumed in Japan every year. In addition, it is estimated that about 80 million of those are plastic umbrellas, and many of them are disposed of. By sharing umbrellas with as many people as possible, it can significantly reduce the amount of waste.

2.Extend the lifetime of the umbrellas by making them durable and repairable

Ikasa’s umbrellas are made of fiberglass, which making them very durable. Furthermore, even if one of the umbrella’s bones is broken, the umbrella is repairable because it is designed so that only one bone can be replaceable. The design and the sharing system make its lifetime longer and allow to use of umbrellas continuously. It is highly economically rational, allowing umbrellas to be provided to more users with fewer resources.

3.Stimulating the local economy through the Ikasa spots

By setting up Aikasa Spots throughout local restaurants and public facilities, it is expected people who come to borrow the Ikasa umbrella even on rainy days can be new customers to those places in which own the Ikasa spot. In addition, those cooperating stores with Aikasa Spot can inform consumers of their environmental efforts.

Craft beer paper is a recycled paper made from malt waste. kitafuku Inc. works with local breweries and restaurants to turn waste into valuable paper products to achieve up-cycling. 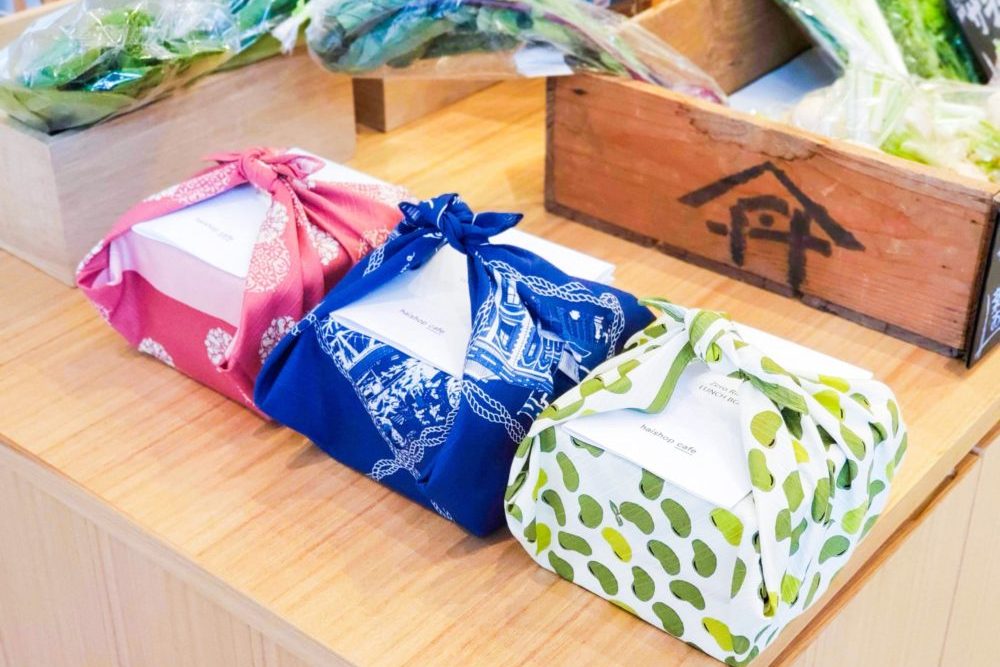 A project to circulate takeout bento boxes in the Minato Mirai area. It aims to solve the problem of disposable containers waste by reusing takeout containers and make mealtime fancy and enjoyable.

Aquaponics is a system of "circular organic agriculture" that crosses hydroponics and aquaculture. It minimizes resource circulation and promotes local consumption to rvitalize local communities.

Coco&K. imports lovely, eco-minded, fairtrade bags from the Philippines. The products are up-cycled from discarded aluminum juice packages. It helps the locals live independently and keeps the environment clean.

The shared office built with thinned wood Yamakita machi in Kanagawa Prefecture. The office is based in the co-working space "mass x mass" in Naka-Ku, Yokohama, and is expanding to other areas.

Web Iikamo Ichi is a web platform that offers a monthly marché online. You can find many Yokohama-made sustainable groceries and other products.

“ZERO PC” is the computer upcycling project led by People Port Inc trying to make the environmental impact by their business zero and supporting domestic refugees and poor children.

Izuru Kawamura and Noriko Kanai team, Yokohama National university, successfully derives cellulose nanofibers from spent coffee grounds(SCGs). This study shows that SCGs cellulose nanofibers can be used as alternative resources and will potentially contribute to the development of sustainability. 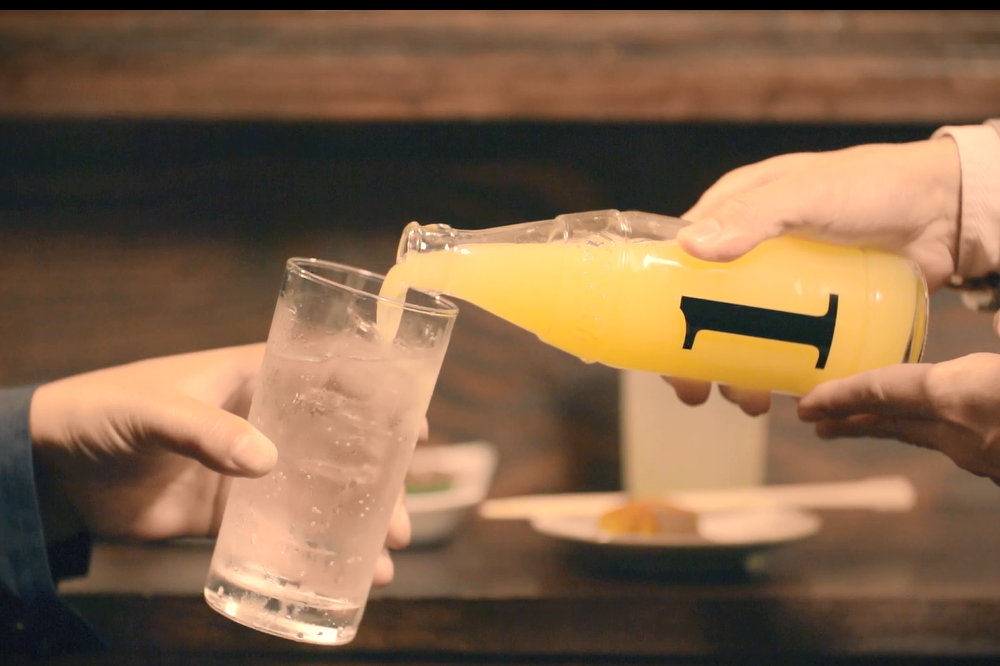 The project is to produce the Yokohama-exclusive beverage and reusable glass bottles in Yokohama. It conceives the regional circle of the bottles and the local consumption of the juice and approaches environmental issues as well as supports the local communities.

Environmental journal Project is to encourage children to be aware of environmental issues and its solutions through making a poster. The project is held every summer to help create new circular businesses in Yokohama.

Food Bank Yokohama is a non profit organization that collects the food that would not be used or would be discarded along the food supply chain and distributes it to homeless people and welfare facilities in Yokohama.

Jellyfish Research Laboratory is a social biotech startup located in Tsurumi-ku, Yokohama from Institute of Physical and Chemical Research. They work on improving biodiversity, marine conservation and life science by utilizing jellyfish.

Yokoyoko Project is a project which intends to provide renewable electricity generated in Yokohama-cho, Aomori to the companies in Yokohama city, Kanagawa. With the system of blockchain which is provided by Minna-Denryoku, Inc., the project make it possible to certify where the electricity came from.

The WE shop is a charity shop based on donation and volunteers run by WE21 Japan in Naka ward, Yokohama. There are several locations and are functioning as a community space where diverse people living in the community get together and make connections as well.

The Circular Economy Plus T-shirt 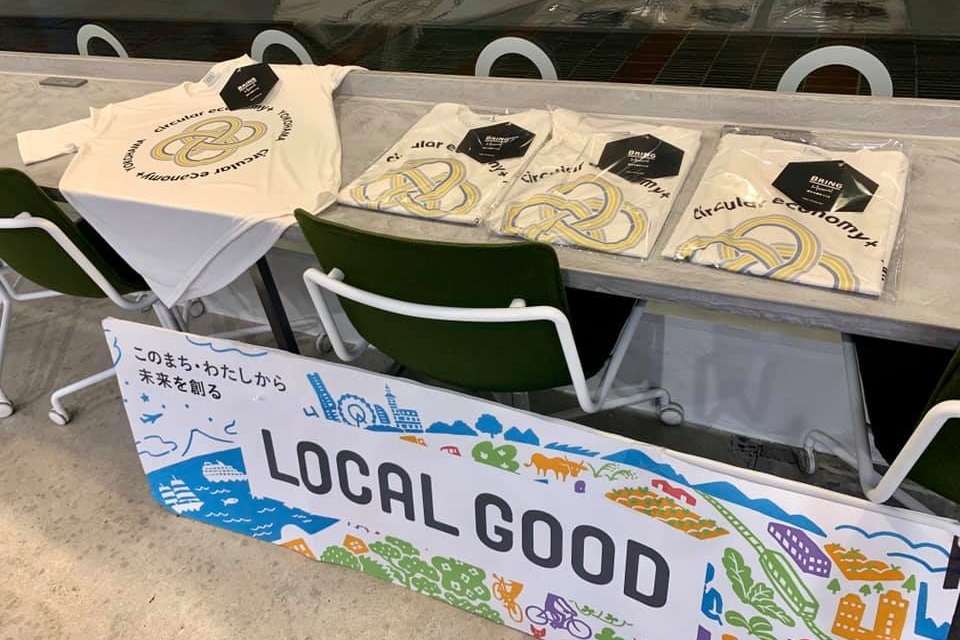 The Circular Economy Plus T-shirt Project aims to make sustainable T-shirts using waste plastic bottles discarded in the area. The project is initiated by the Yokohama branch of NPO greenbird, Japan Environment Planning Inc., Okawa Printing Co., Ltd., and a designer from Yokohama.

The Kanagawa Up Cycle Consortium 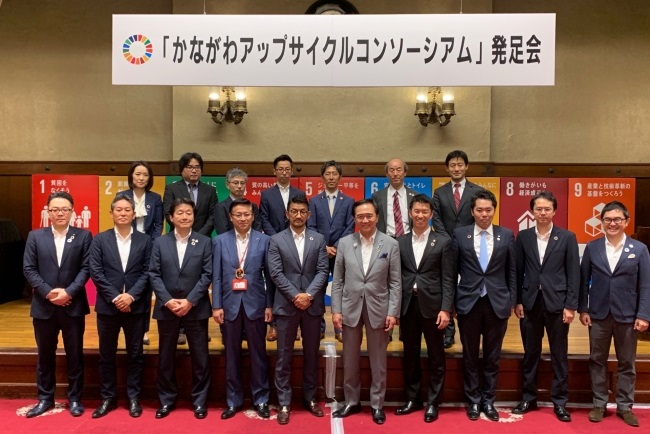 The Kanagawa Up Cycle Consortium is established in collaboration with Kanagawa Prefecture and TBM Co., Ltd. that develops, manufactures and sells a new material “LIMEX.” The aim is to promote a circular economy through up-cycling that utilizes LIMEX and to realize a circular town development.

"Nite hi WORKS" is an art project by artist Minoru Inayoshi and actor Azusa Watanabe. The concept is "changing something from the original to something now" by unexpectedly and freely adding different languages ​​(ideas) from different eras, cultures and many other things "different." 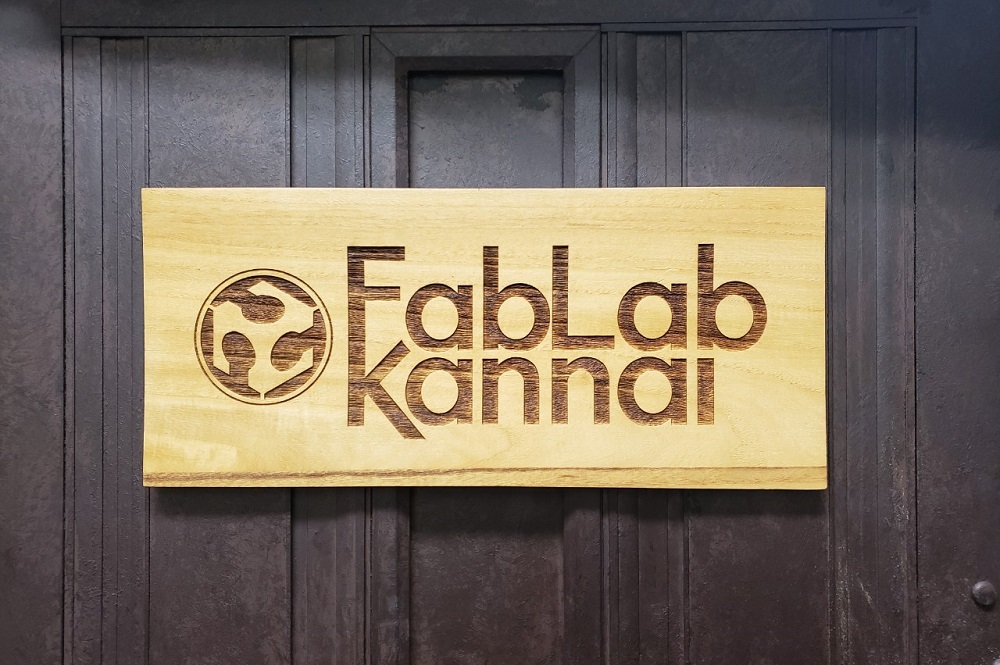 Fab Lab Kannai is a manufacturing laboratory for citizens in Kannai, Yokohama. It functions as a local manufacturing base, cooperating with co-working spaces in the area for start-up companies, and developing business labs in local community spaces as there are several 3D printers, sewing machines and laser cutters inside. 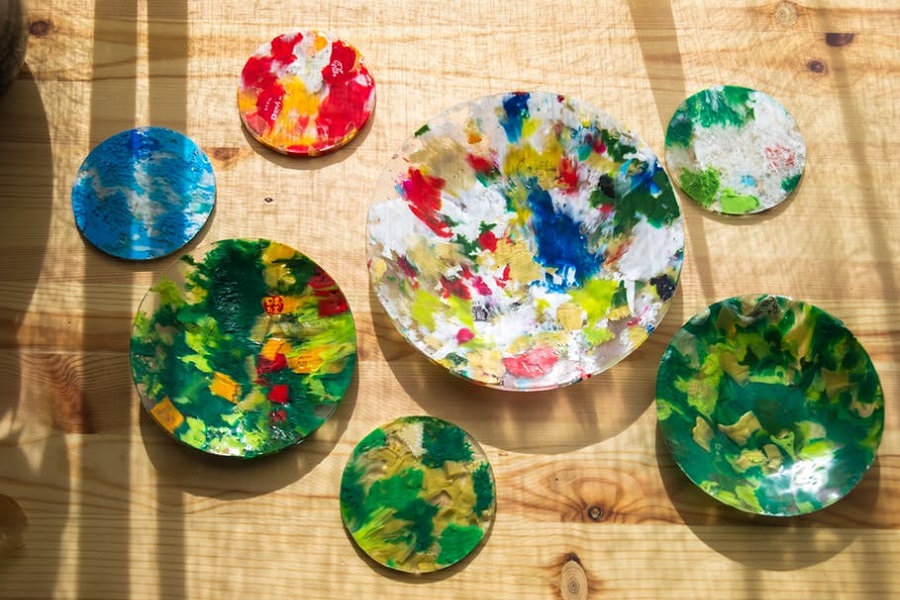 "reBirth" is a project to transform discarded ocean plastic into beautiful traditional crafts. The project produces beautiful molded plates while mixing different types and colors of plastic materials. The idea was created by “Plas+tech project” which is led by Techno Labo Co., Ltd. 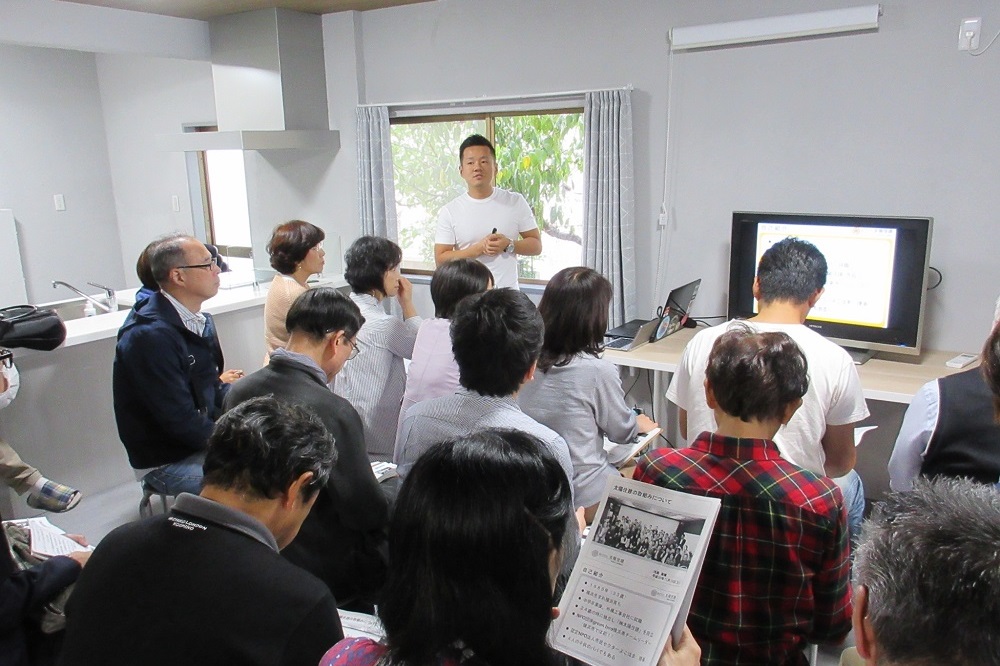 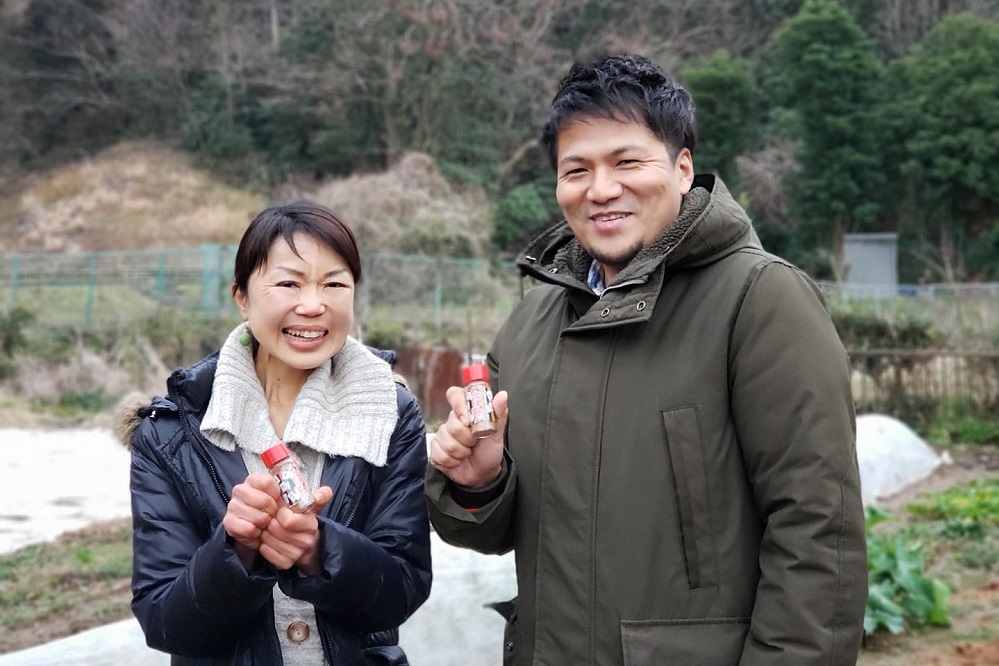 SDGs Yokohama Kanazawa Living Lab works on the circular economic agriculture project which makes use of the eelgrass (seaweed that grows in the sea) as fertilizer, grows vegetables such as chili at local farms and creates a unique seasoning by associating with a local elementary school. 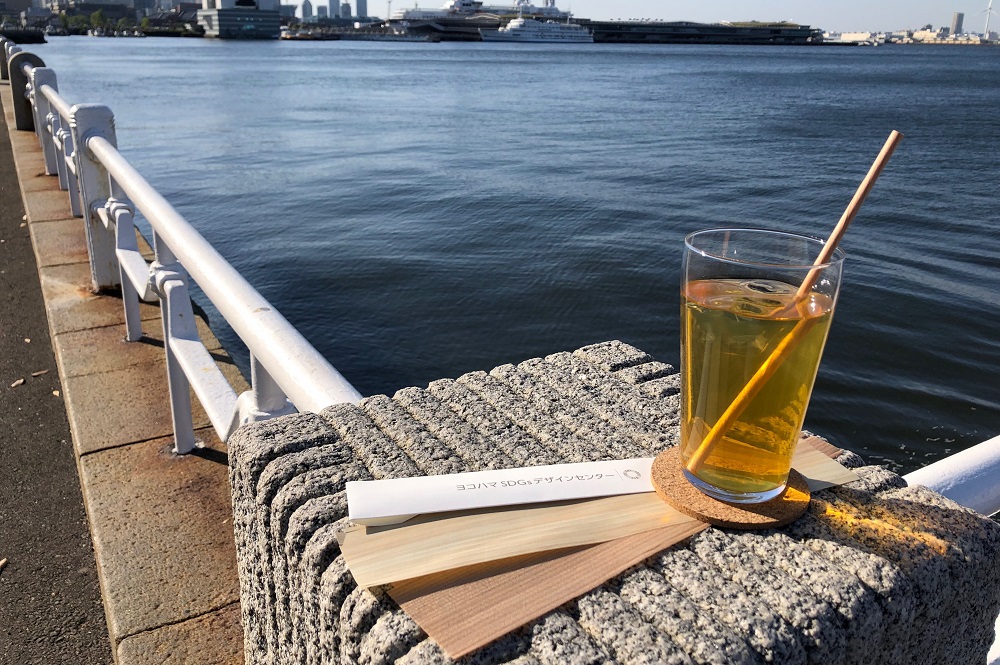 The project produces wooden straws made of wood thinned from the water source forest in Doshi Village, Yamanashi Prefecture, which supplies water with citizens in Yokohama and those straws are handmade by people with disabilities Yokohama.